Susan Sexton an icon of the horse world

Susan Sexton. That famous signature SS on so many photographs.   I always thought of her as the grand dam of sport horse photography having started her business in the mid to late 70's.  She had been a household name to me practically all of my adult life.
I've waited awhile to write anything about Susan who we lost on Nov 11th after a year's battle with Leukemia. I had to settle my thoughts and come to some level of acceptance that she is gone. 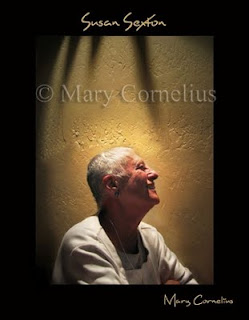 As a fledgling photographer sequestered in the Pacific Northwest, it was Susan's images that I noticed in nearly all of the sport horse magazines that I could name at the time.    Lets face it, the PacNW has never been exactly a dressage mecca, so her images helped to serve as my window to the rest of the country.  Though I was engaged in developing my own style of shooting horses, Susan's images helped to show me "how it was done" out in the "real world" and helped give me confirmation that I was on the right path.   In 2003 I eagerly looked forward to an opportunity to finally meet Susan in person.  She was friendly, gracious and humorous and wonder of wonders, recognized my name.  She had wondered what had happened to me during my 7 or 8 years of "retirement".   I guess we photographers all pay some kind of attention to the photo credits in the publications.  At least we used to when there were fewer of us.
Since that time we became friends and had even more opportunity to converse in daily exchanges first through the Equine Photographers Network and then with the Vision 18 Collective group.   From time to time she would call or email me to let me know that she appreciated the way I had handled a situation or wanted to support some ideas that I had put forward. She didn't have to do that, but the extra effort she put out in support I look at as part of her generous nature.  That doesn't mean that she gave her work away, quite the contrary, photography was her profession as well as passion. She was in it to win it. To produce excellence as well as to support her family.

In our small group of women equine photographers, the Vision 18 Collective, Susan was an active participant often keeping our email boxes lively with her quips and ponderings. We particularly enjoyed the colorful images that she produced while living in Mexico.   Our frequent communication was full of life and possibility.  She challenged us all to keep moving forward in our craft as she kept herself on her own learning track.
She shared her work with us, some that was in process, some that was just purely experimental with an idea to developing a skill or trying a new look. The digital age brought with it a steep learning curve and rapid changes and sometimes Susan would get discouraged that she wasn't keeping up…and then she would come up with something so beautiful.

I've seen her time and again share her immense knowledge generously, I've also seen that come back to bite her, I've seen her all business at World Cups 2007 and 2009.  Then giggling if we happened to stand together and take the same shots in the same timing.  I watched her come to life with expressions of pure joy on her face while shooting beautiful horses galloping and passaging past us on the beach or up on a hillside at sunset.  We sat side by side on the beach as the light faded and we kept photographing a big black friesian passaging along the beach, squeezing out every last bit of light that we could.  Earlier this year I drove to Florida and back, stopping over in Phoenix where I was able to meet up with her for dinner.  Her hair was growing back after the first round of chemo and she was looking forward to getting "back into it"in fact was photographing a show the next day.   I had no idea that those little moments  on the beach and at World Cup and at dinner were all that I would get but I do know that I had enjoyed them immensely.
Quite frankly I am heart broken at her passing, but I will try to remember to smile when I think of her and carry forward her joy of photographing beautiful horses and their riders as that is a passion that we indeed shared.

This film by Horsefly films was produced from their film footage of one of Vision 18 Collective's retreats with still photos by some of the members of v18C and Susan's family.
A beautiful tribute with music by composer Brandon Visel.   You may recognize that name, as one of his musical scores is featured on my website.     http://horseflyfilms.com/preview/susansexton.html

Read about the Traveling Wee Horse on Facebook.  An ongoing project by V18C to honor Susan.

Her children have been updating her website www.susanthephotographer.com
Posted by Mary at 11:53 PM

2018 Photographic Events Schedule
Though I have altered my business model to make more time for special projects, private bookings and other pursuits, I do still photograph a few competitive events.
Listed below are events where I will be either the Official Photographer or assisting the official photographer.
My calendar is still forming for 2018.
July 24 Oldenburg GOV Inspection - Wild Turkey Farm, Wilsonville, OR
September 7-9 Oregon Dressage Society Championship Show - DevonWood Equestrian Center. Sherwood, OR
September 27-30 Region 7 Championships/CDS Annual Show ASSISTING Terri Miller-Steiner, official photographer. LA Equestrian Center Burbank, CA
Images from events and private sessions that I have photographed can be found on my gallery site.

ARTISTS PLEASE NOTE: Because each of my images is my own vision, composition and overall artistic expression, I do not give permission for my work to serve as subject matter for other artists to use as reference. I save them for my own renditions in various mediums. My best advice is to get out there with a camera and shoot your own vision. Thanks for your understanding.
================================
All images on this blog are copyrighted to Mary Cornelius and may not be copied, reproduced, republished, uploaded, downloaded, posted, transmitted, mirrored on another server, distributed in any way, folded, spindled or mutilated without the prior express written permission of Mary Cornelius.
If you would like to purchase prints, discuss the use of any images on this blog for commercial/editorial/personal purposes or just have questions,
feel free to contact me.

Clients and Cool Businesses & other Links 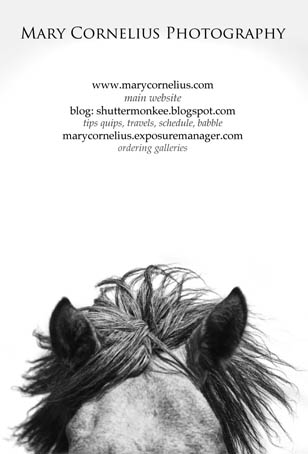 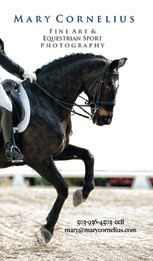 Thanks to Jane Hannigan for permission to use this image I took of Maksymilian at the Palm Beach Dressage Derby 2009. I just love this horse!